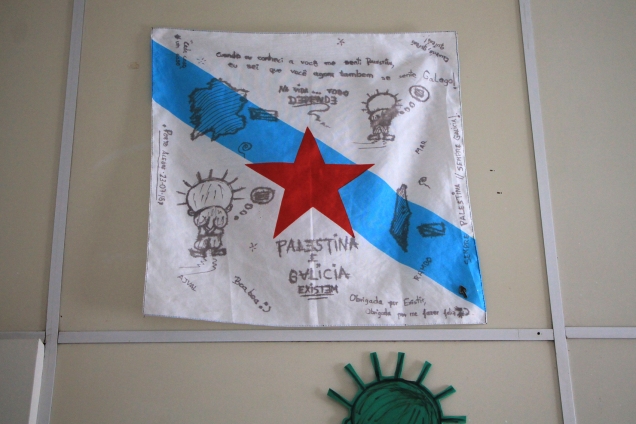 The idea of Couchsurfing is when you come to the new place you never been before and don’t know anybody there are already friends around you, but you don’t know them yet.

I was supposed to stay with Simoni’s friend Max from her home-region Mato Groso, but he stopped replying my watsapp, and his phone was out of connection, and he is this rare person nowadays who doesn’t have Facebook. So there was no way I could have contact him. I made my last minute open request in CS explaining why I’m looking for a couch in a short notice. Surprisingly few people answered me in a next few hours and I choose a guy Maher. I forgot to check where is he from, I just briefly read his personal description and few references, and if was enough for me to accept his invitation.

When we met I asked where he was from and he said Palestine. I don’t really know anything about Palestine and I never met anyone from there. I was in Israel few years ago, but I was focused on different things this time, so didn’t pay attention about the history part. And today I questioned myself: What do I know about Palestine? The first thing that came to my mind wasn’t positive. I think it’s a place where they keep the war ongoing.

Usually I am not a shy person if it comes to curiosity, and I can ask direct question if I want to know the answer. Sometimes too direct.

I asked Maher if there is a war in Palestine or something?

And he said: “I actually never been to Palestine.”

I said: “Wait, are you Palestinian or do you have any other nationality?”
And he asked me if I know anything about what has happened there since the beginning?
I said honestly, no.

And then he told me this story.

There was a country Palestine. People were living there since many generations in peace. But in 1946 after second World War Palestine went under British authority. They opened the borders and decided to bring back all the Jewish people to live in their land which was their originally thousands years ago when Jesus came to Earth. They gave them weapons and support with the army.

Palestinians didn’t have a strong army, so Jewish were simply killing all the citizens. Palestinian government got panic and asked support from neighbors – Arabic countries who had borders with Palestine. The government of these countries asked Palestinians come to their countries wherever were closer, so they could stay there safe until the army solves the conflict.

This was 1950s. And they were never able to come back since then.

People couldn’t believe, even decades later they still had a hope they will come back home. But even few months since they were gone there were no homes any more. Jewish were settling incredibly fast with all the support. They destroyed everything and built the entire cities on the spot. The Arabic armies were betrayed and they left. Israel occupied almost all the territory and there was just a little piece left to Palestine.

I am Palestinian and this is the only nationality I have. I was born in Syria, but Syria doesn’t give their nationality just by birth. And Israel control Palestinian territories, if you haven’t lived there and don’t have a special id you are not allowed to enter even with Palestinian passport.

Year by year people started to make their living. My mother sold her necklace – the only valuable thing she had, bought a small land and started building a house. She build a ground floor, rented it out, lived on the roof while building the second floor, then renting it out and keeping building.

Nowadays the life in Syria is pretty good. I love Syria. Yes, there is a war happening there right now, but this is a different story. You know, we are still the same people as any other people, we have the same daily life as anybody else, we work hard and we enjoy holidays, we have our traditions and cuisine, we dance, we singe, we laugh and love.

And like anybody else we have dreams. My dream is traveling. And this is complicated. Having Palestinian passport is almost impossible to travel. I need visas everywhere and it’s almost impossible to get. We can only travel free to few Arabic countries. And there are just few countries with easier requirements. Brazil is one of them, but even though I struggled a lot to come here.

How did you feel when you first left middle east?

I thought there would be something totally different, completely new life. But then I realized that “The grass is not always greener on the other side of the fence. Fences have nothing to do with it. The grass is greenest where it is watered. So when crossing over fences, carry water with you and tend the grass wherever you may be.”

What was the biggest surprise?

The biggest surprise was that I faced people judging me by my nationality. I never experienced this before. There is a guy from my university who introduced me to his friends: This is Maher, he is Palestinian, but he is good.” I was shocked. Did he just mean that all the Palestinians are bad? What is the reason to think so?

What is this pendant you are wearing?

Handala is kind of plant which only grows in a desert, and the name of the most famous character of Palestinian cartoonist Naji al-Ali. It represents a ten-year-old boy who clasped his hands behind his back.The artist explained that this was he when forced to leave Palestine and would not grow up until he could return to his homeland. His turn back and clasped hands showing the character’s rejection of “outside solutions”. Handala wears ragged clothes and is barefoot, symbolising his allegiance to the poor.

And I’m kind of the same. I don’t have money, but I have education and I am working hard. And I don’t want to grow up until I see the world.

And this is the reason I’m here.

Back to all days

4 thoughts on “Day 30. The story of one Palestinian guy”

There was an error retrieving images from Instagram. An attempt will be remade in a few minutes.